Sandro Hit was the most represented stallion at the 2020 Olympic Games. Many claim that this is due to the fact that Sandro Hit bred so many mares, however, it is undeniable that Sandro Hit is proving to be one of the most important stallions in the history of the sport of dressage. One cannot deny his superiority when it comes to producing top quality dressage horses! Additionally, he is proving himself as a top quality damsire, and his daughters are highly sought after for breeding purposes.

Few stallions have managed to become a legend during their lifetime...and then there is Sandro Hit. This unique black beauty and his offspring are of epochal importance to world dressage horse breeding. Sandro Hit has started a legendary new dynasty in dressage horse breeding is considered the founding stallion of Schockemoehle Stud. Since 2012, he has been part of the illustrious circle of the world's best dressage sires. In 2017 and 2018, he was second in the WBFSH ranking of the most successful dressage stallions, and has been placed third since 2019. Sandro Hit is himself a German national champion and World Champion of six-year-old dressage horses and has trained up to Grand Prix. In the dressage WBFSH world ranking, Sandro Hit was placed fourth in 2015. From 2010-2012 he won the USEF/Performance Horse Registry Leading Sire Award in the US as the best dressage sire.

Sandro Hit's offspring are high in blood, modern, harmonious, equipped with excellent movement and a fascinating appearance and shine. He produces chic, modern, strong-moving progeny, who are gifted with captivating charm and are conquering the market. They are brilliant typed and incredibly light-footed. He has produced top-priced auction foals and horses with more than 190 licensed stallions in Germany alone including several champion stallions, state premium mares, championship winners, and numerous Grand Prix winners. The enumeration of his licensing winners, premium stallions and stallion market top prices would go beyond any scope. Many of them also competed, like Sir Donnerhall I, Vice World Champion and German Champion, Sancisco OLD, victorious in Grand Prix, San Francisco OLD, German Champion, auction top price and victorious at advanced (S) level, Sorento, Burg Cup finalist as well as Sir Donnerhall II and Sir Skyfall OLD, both placed at the World Championships for young dressage horses.

His daughters, 493 of whom were awarded the State Premium, are led by the dressage World Champion and double German Champion Poetin, who was auctioned for the record sum of 2.5 million Euros at the P.S.I. Auction.

The descendants of Sandro Hit have long since conquered the biggest championship stages around the globe. Five of them competed at the 2016 Olympic Games in Rio/BRA, including Showtime FRH/Dorothee Schneider, who became team gold medalist and came sixth in the freestyle, and Santano II/Christopher Burton/AUS, eventing team bronze medallist. In 2019, Showtime FRH won team gold and double silver in the individual finals of the European Championships. In 2018, Salvino/Adrienne Lyle was part of the USA dressage silver medallist team at the World Equestrian Games in Tryon/USA. In the 2015 Hanoverian stallion book, Sandro Hit was recorded to have sired 1,087 competition horses with winnings of 744,268 euros and as of 2016 he has produced 1138 competition horses with total winnings for 887,913 euros.

With a HEK-breed value of 155, Sandro Hit is clearly rated positively.  The numbers, which form the basis of this breed value, are pretty impressive.  1,061 descendants obtained placements in dressage – 204 of them in classes at the S-level.  59 have successes in S***-classes, 22 in S****-classes and two in S*****-classes.  In his successful, rising dressage-stars, we often find Donnerhall’s genetics on the dam side of the pedigree.  This is the case with his most successful descendant, which carries the Hanoverian brand.  It is Dorothee Schneider’s Showtime FRH (life earnings: 230,697 Euros), a team Olympic champion in Rio de Janeiro in 2016.  Heinrich Wecke from Stadthagen bred him out of a dam by Rotspon/Donnerhall, which stands for very rideable blood.  Since several years, Sandro Hit is one of the top three dressage horse producers in the WBFSH world rankings, which also underlines his value as a dressage horse producer.

Several sons of Sandro Hit  now have higher HEK-breed values than he does.  Sir Donnerhall (dam by Donnerhall), the national dressage champion and vice world champion of 2006, was rated highest with a value of 172.  He too has successful descendants, a total of 1,067 dressage stars, including 210 with victories and placements at the S-level.  Fifty five reached the Grand Prix level, eleven are successful at the demanding S****-level, and one successfully competes at the top international S*****-level.

Sandro Hit has produced over ten Bundeschampions to date – and at the 2011 World Championship for Young Dressage Horses he presented numerous finalists such as Showtime, Sunday, and Soulmate. His offspring are setting new records in the sport with 142 mares being awarded state premium, and numerous progeny being auctioned for top prices like 2.5 million euros that was fetched for two-time Bundeschampion Poetin, or 580,000 euros for the Bundeschampion San Francisco.

Sandro Song, his sire, was champion of his licensing in 1990 and main premium champion 1992, while his dam, Loretta, has passed on her genes to significant licensed sons like Royal Hit and Grand Prix winner Diamond Hit (who is sire of the 2011 NRW champion stallion).

Flame Dancer, known on our farm as "Fantasia" is one of our foundation broodmares. She is by Elite Hanoverian Stallion Fabuleux, and out of a Graf Goetz mare. Fantasia is in the Main Mare Books with both the American Hanoverian Society and the Oldenburg Horse Breeders Society (GOV). Fantasia is 16.1H, dark bay with a beautiful head. She passes on her wonderful temperament, uphill movement, an exceptional hind leg, and that classic rocking horse canter that Fabuleux offspring are known for.  In 2018, she produced a beautiful dark bay (almost black) colt by Supremat OLD (Sandro Hit/Rubinstein I) who was named premium foal and stallion prospect at his Oldenburg inspection!

Her sire,  ES Fabuleux, a Class I Stallion, successfully completed his 100-Day Test in Adelheidsdorf, where his exceptional scores included Walk 9, Trot 9, Canter 10, Temperament 9, Rideability 9, Willingness to Work 9. He received the outstanding dressage score of 130.45 points. Fabuleux has sired dozens of top foals and premium foals. They have won numerous Get of Sire classes at major shows in North America. He has sired numerous Elite Mare Candidates, High Scoring Mares, and Top AHS Inspection Tour Mares. Fabuleux is from a rare damline illustrating 7 direct generations of SPS/Elite Mares. Fabuluex was purchased and imported by Dr. Barbara Schmidt with the goal of improving the quality of North American broodmares, and Fabuluex did not disappoint.

Flame Dancer has produced 3 wonderful foals for our farm: Socrates NLS (Supremat OLD) who was named premium foal and stallion candidate at his GOV inspection in 2018, Relentless NLS (Rascalino) who received excellent remarks on type and movement at his Hanoverian inspection in 2019, and Reverence NLS (Blue Hors Rockefeller) who will be inspected in September 2021; we are expecting excellent remarks on his type and ability! All foals have been very beautiful, trainable and are born excellent, people pleasing temperaments. We can't wait to see what Flame Dancer produces with Sandro Hit!

This foal will be registered with the American Hanoverian Society, and the colt option is available to an approved FEI home- This is a wonderful opportunity for a professional rider. Private Treaty with terms available, please contact for more information. 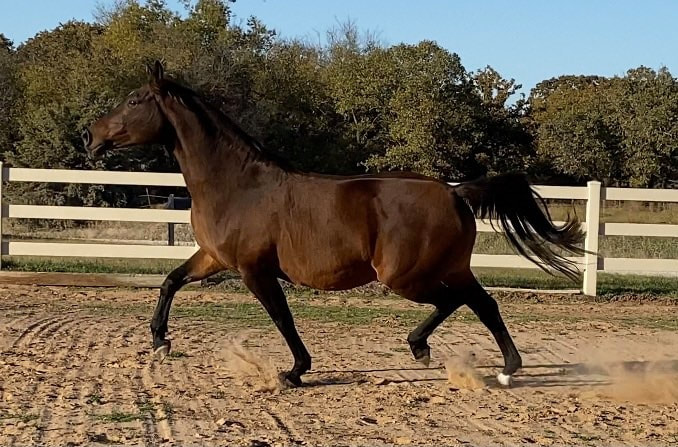 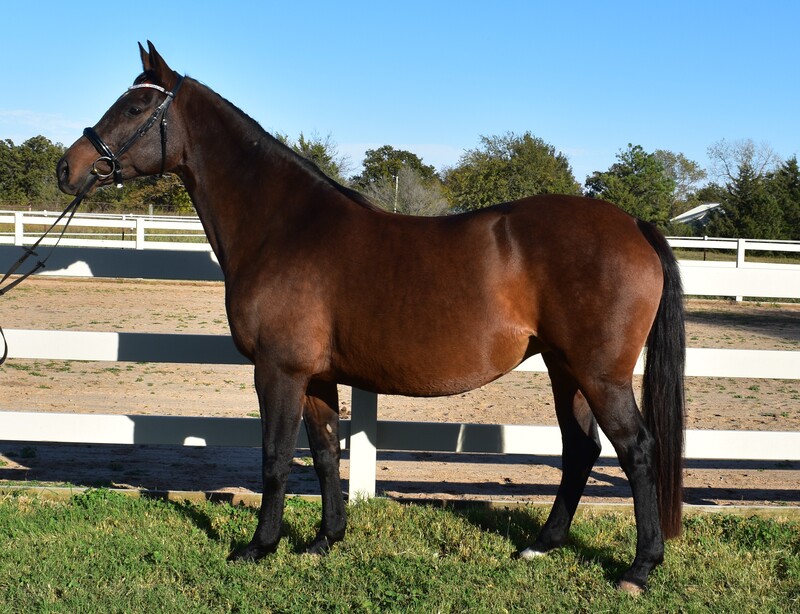 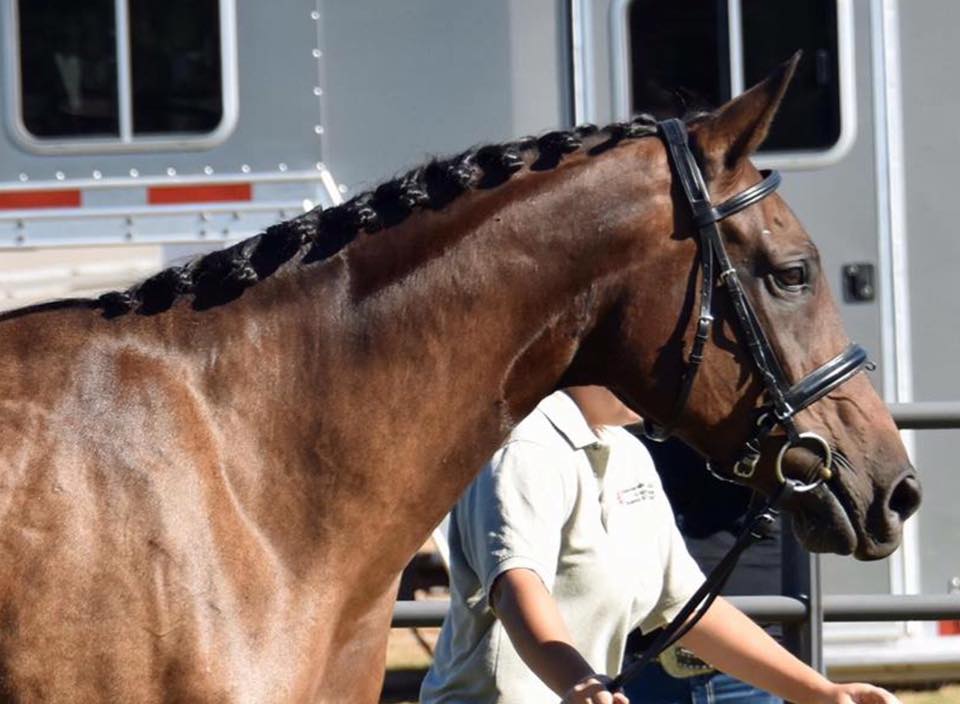 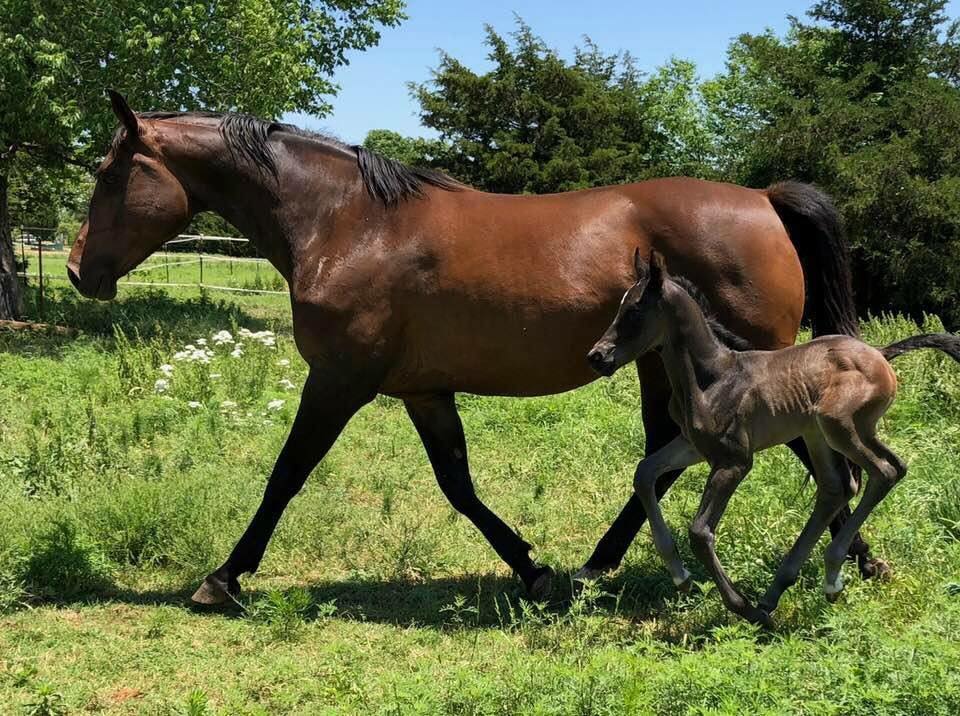 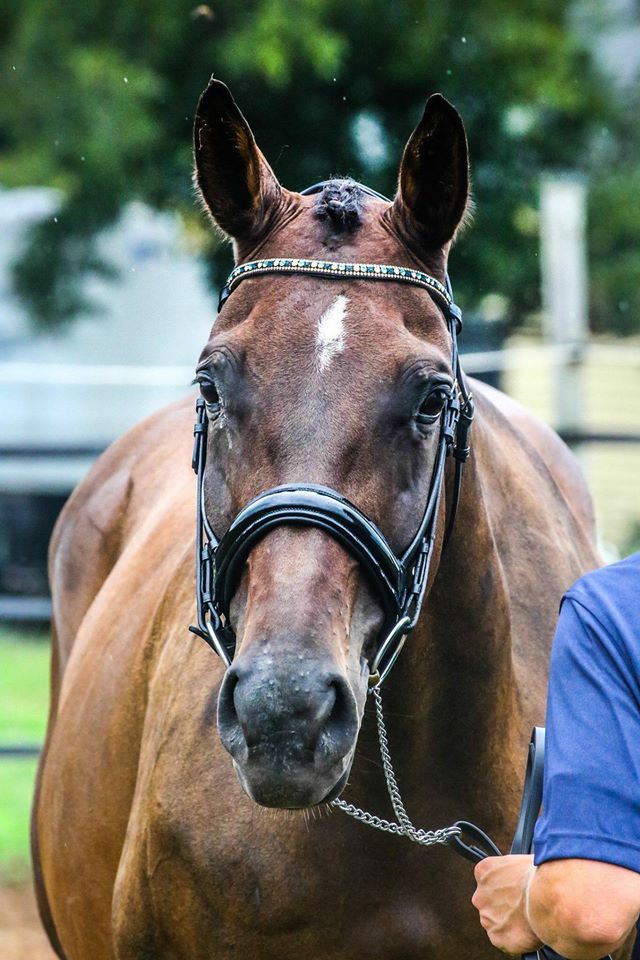 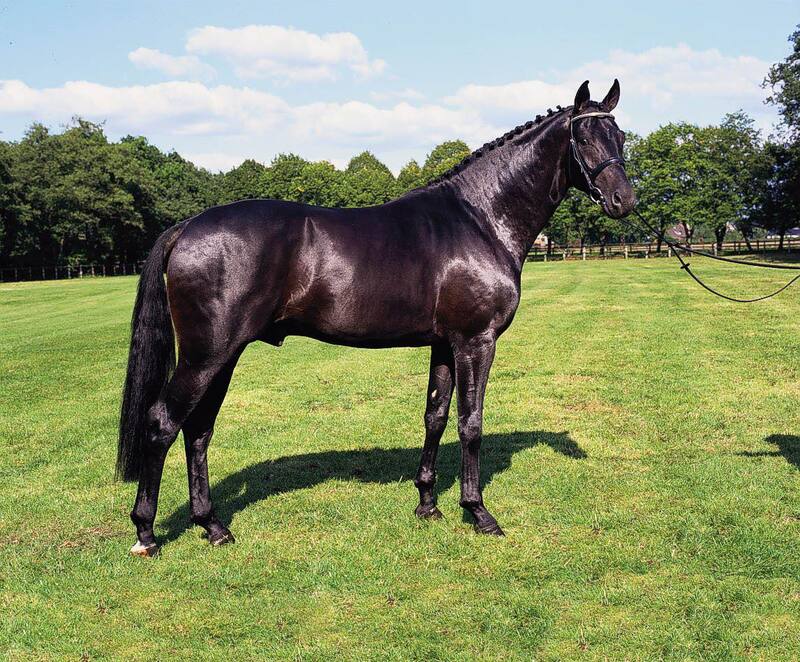 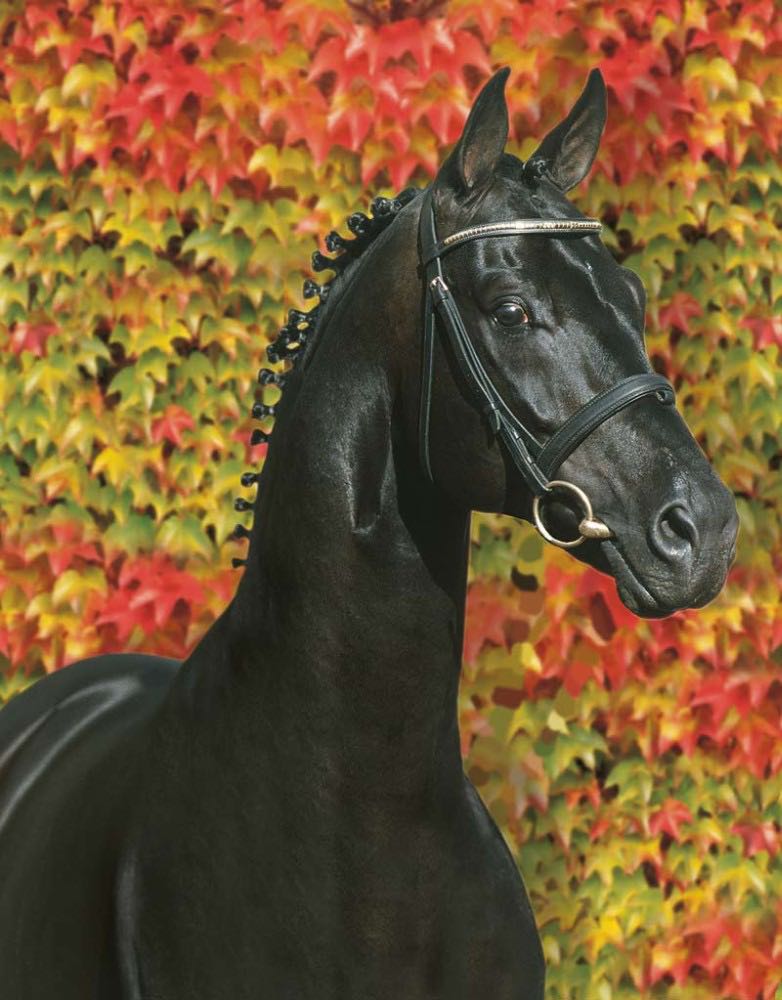 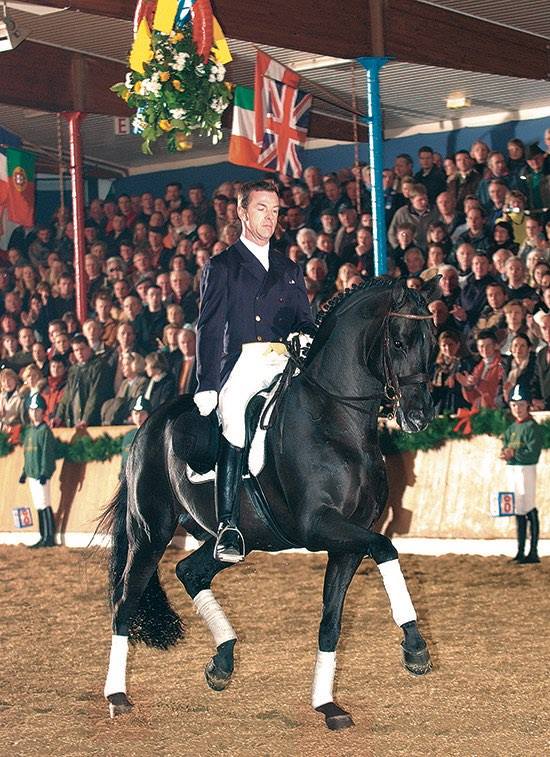 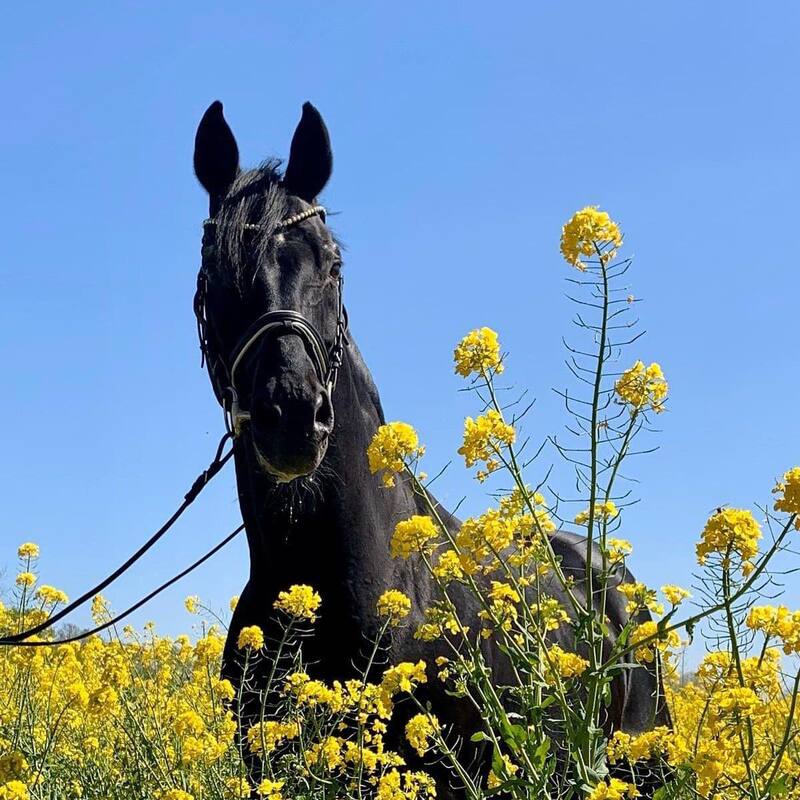