His sire, Eastwood, was licensed in Germany for Mecklenburg and GOV. I’m October of 2021, he attended the North America Stallion Test where he gained approvals with all of the major warmblood registries. His depth of pedigree reflects itself in his presence, three quality gaits, elasticity and uphill tendency. Eastwood shows promise for top international sport! He is now in full training with Mikala Münter at Bell Tower Farm in Wellington, Florida. Mikala is a Danish born International Grand Prix dressage rider. She represented Denmark at the 2014 World Equestrian Games, where she placed 7th with the Danish team. She also qualified for the 2014 World Cup finals in Lyon, France finishing 2nd in the North American league. In 2015 she qualified for another World Cup finals in Las Vegas, Nevada.

​His dam, Rubiya is the is by Elite Hanoverian stallion Rascalino (Rotspon, Velton Third) and out of Dunin Bradstreet by Diamont. She is everything we look for in a broodmare, from her wonderful temperament, coupled with a lovely, uphill conformation, and excellent movement. Rubiya was shown in dressage through second level with average scores in the mid 60's before sustaining a pasture injury, which, unfortunately ended her show career.
In 2015, Rubiya was inspected with the American Hanoverian Society, where she was site champion, receiving incredible scores of 8’s for walk and trot.

Rubiya’s sire, Rascalino completed the dressage portion of his Adelheidsdorf performance test with the knockout score of 153.37. This score was good enough to make him the winner of the test, with the score of 103.56 on the jumping portion. In fact, this respectable jumping score is probably a product of the of the Wedekind/Ferdinand and Wendekreis/Ferdinand in damsire, Velten Third's background. A further performance component is added through paternal grandsire Rubinstein I, a line known for dressage excellence, but also with some talent at the jump. World Cup III as the sire of the second dam insures dressage excellence. Rascalino is a beautiful, elegant animal with the best gaits and exceptional freedom of the shoulders, sure to make his mark in modern dressage breeding, in the hoofprints of his famous sire and grandsire.
Rascalino’s sire, Rotspon, needs no introduction. After years of producing quality offspring, in 2017 Rotspon was awarded 'Hanoverian Stallion of the Year' by the Hanoverian Verband in Verden, Germany.
Rotspon is a top quality son of the dressage stallion Rubinstein I. He was the sovereign winner of the Hanoverian stallion performance test in 1998, scoring an excellent 148.82 points in the dressage category. Like his father, Rotspon is a very impressive horse with a great rideability, outstanding movements and a high ability for dressage. He also has a good jumping technique which is above average. He is an elegantly made sire in a noble black coat with a lot of expression and appearance.
Rotspon's son, Rosevelt, competed for Team USA at the 2016 Rio Olympics. With his rider Allison Brock, Team USA won Bronze. Rosevelt also won the 2015 Grand Prix in Wellington, FL and did it again one month later at the Grand Prix CD13*.

The first crop of offspring by Rotspon were born in the year 2000. The foals have beautiful heads and a good conformation (long sloping shoulder, long well set up neck). They are equipped with a very elastic trot and a ground covering walk, and have been very much in demand. In the 2015, according to the Hanoverian Stallion Book, Rotspon is credited with 888 competition progeny with winnings of €680,105 – 767 dressage placegetters with 80 progeny competing at S level.
​
Rubiya’s damsire, Diamont was a noted dressage sire and was ranked first in 1994, 1996 and 1997 by the USDF among all Hanoverian stallions for producing USDF Horse of the Year qualifiers. In 1995 he was the 7th leading producer of qualifiers among stallions of all breeds in the U.S. He produced three licensed stallions and fourteen Elite Hanoverian mares. Diamont has three offspring currently competing successfully in European dressage circles. His offspring are well noted for being successful in all the sport horse disciplines including dressage, Grand Prix show jumping and eventing. His son Dior is well know competing at Grand Prix level. The well known Grand Prix dressage stallion, Domingo, is a 3/4 brother to Diamont. Domingo is also a top producer of Elite Mares. He is also the sire of an approved Hanoverian stallion, numerous breed show winners and both hunter and dressage champions.

Extravagance NLS is being offered at $18,000, with special consideration given to competitive dressage homes. His price includes registration, inspection, branding, microchipping, vaccinations, coggins, health certificate, and castration at 6 months of age. Please send inquiries to info@nextlevelsporthorses.com. Continue to check back for updated photos and videos! 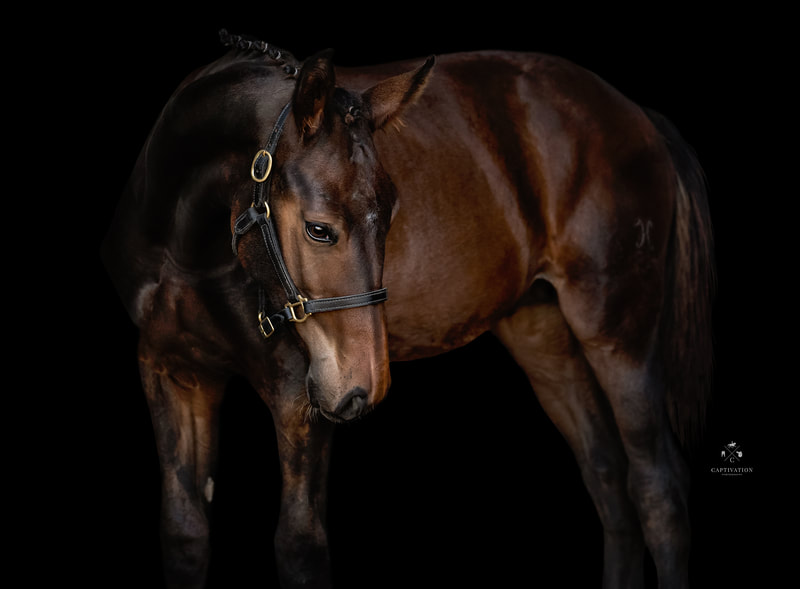 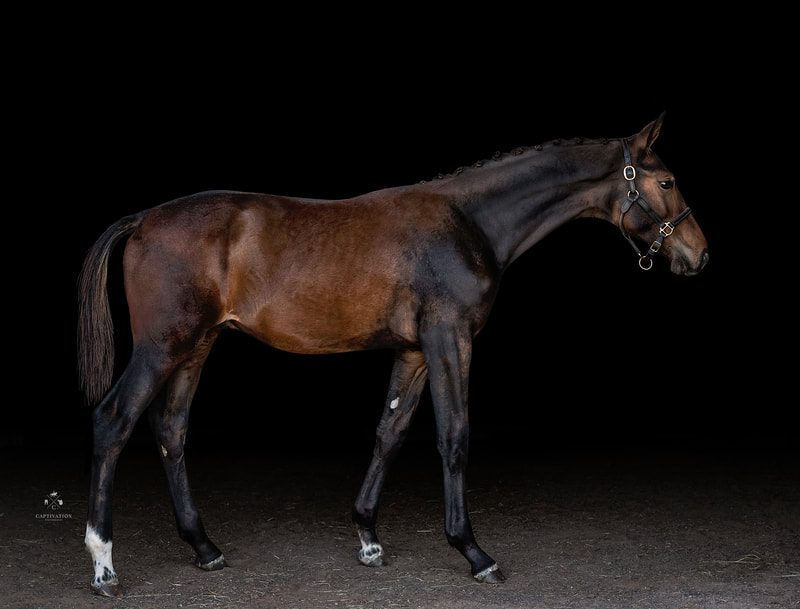 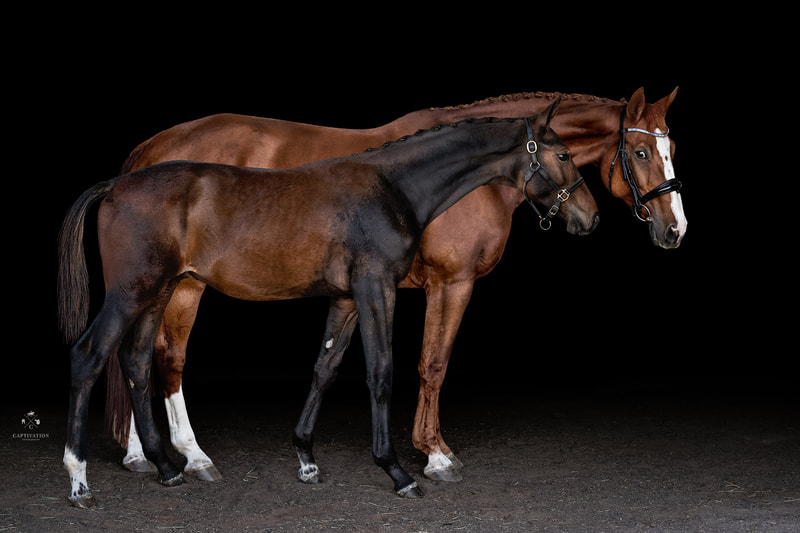 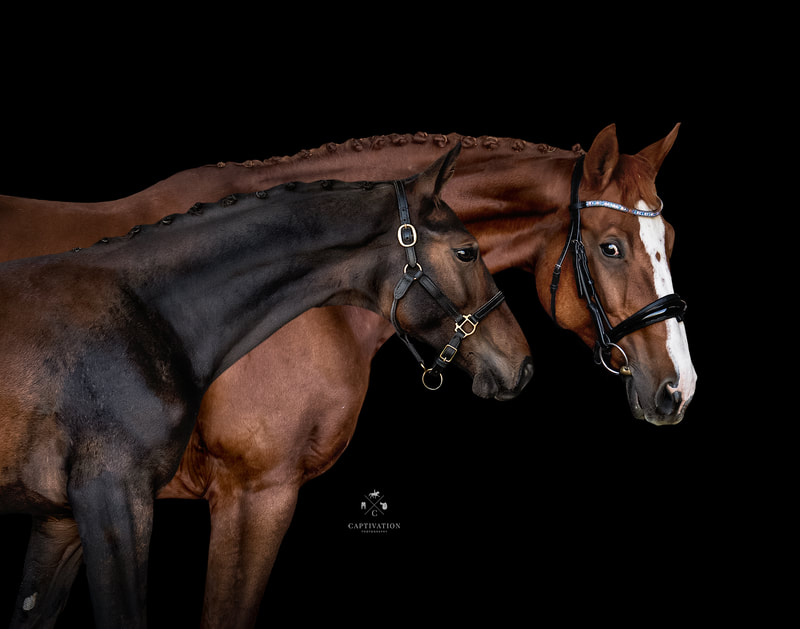 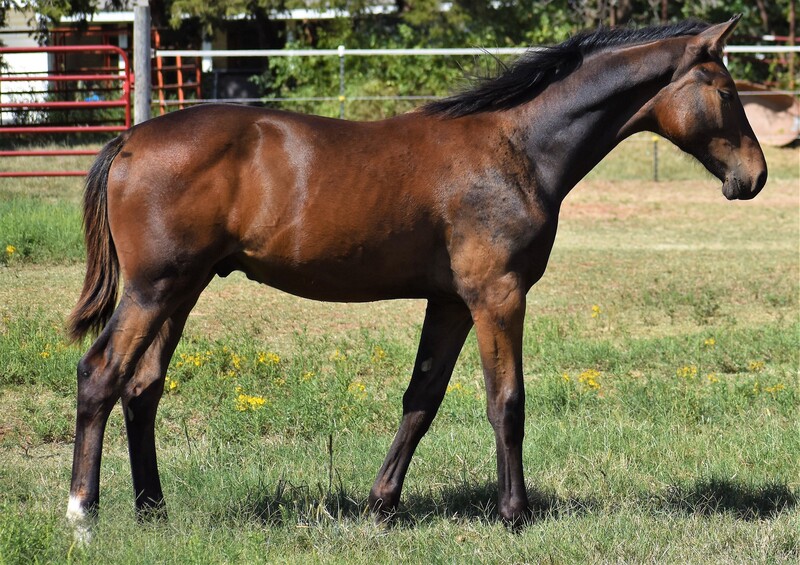 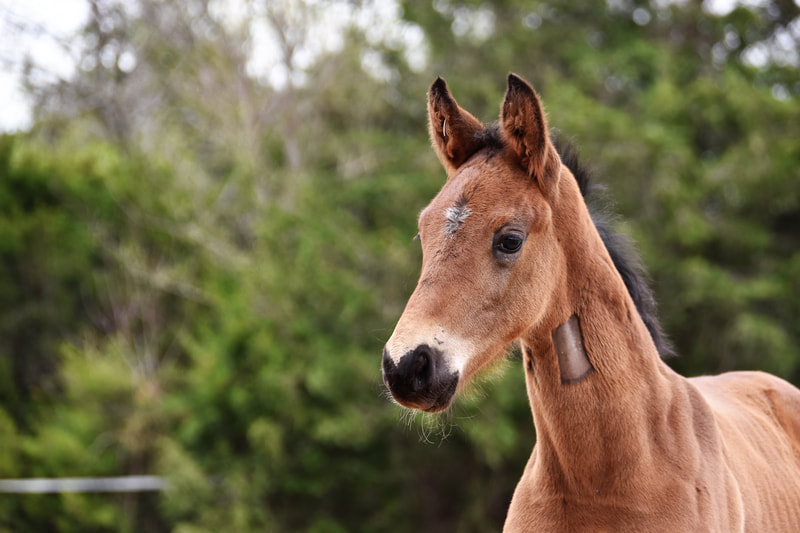 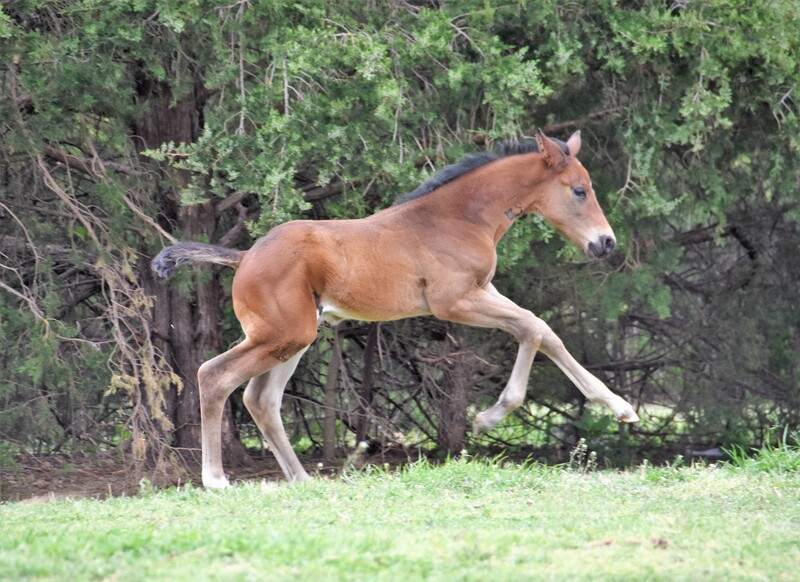 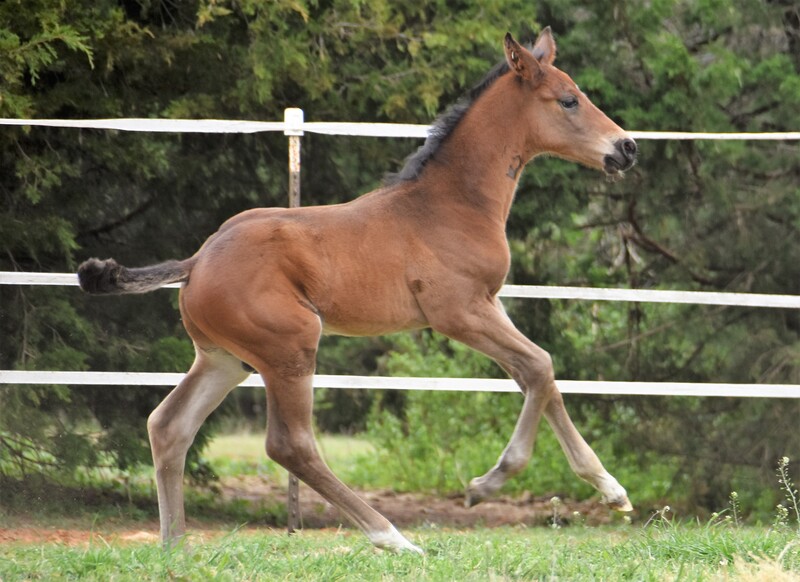 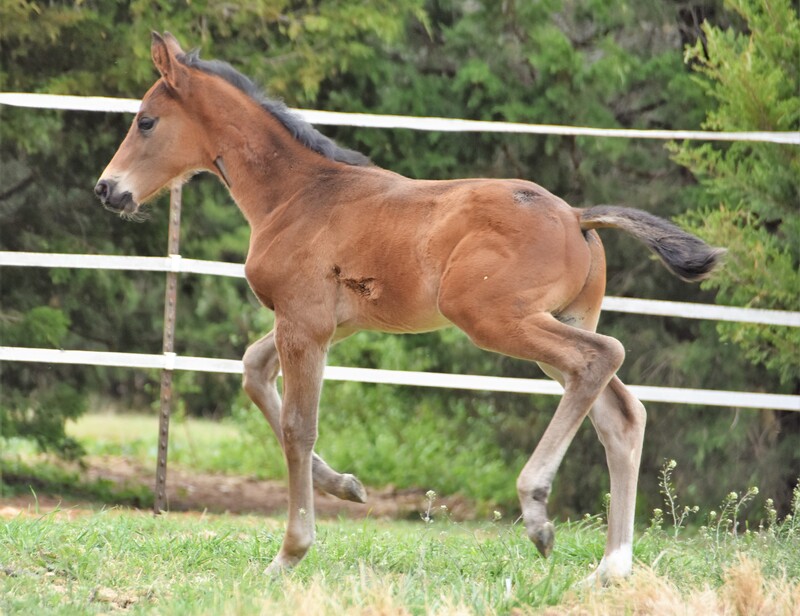 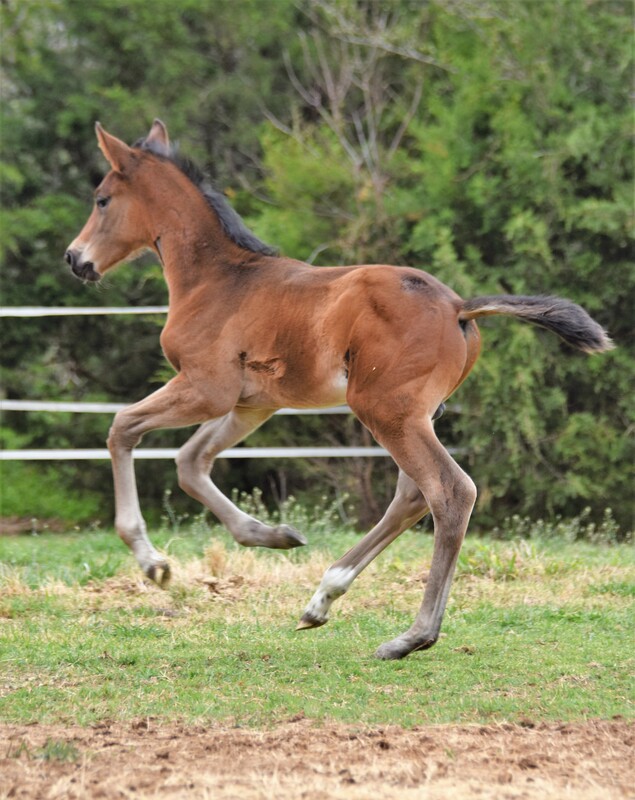 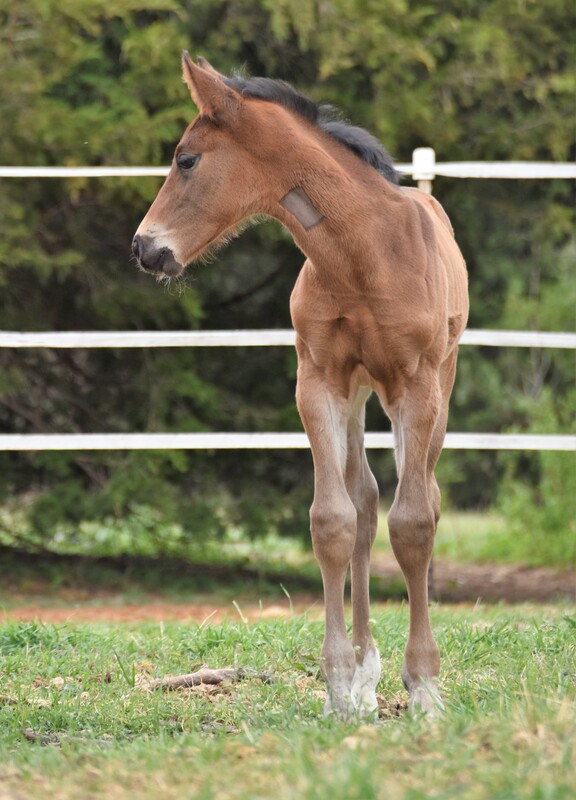 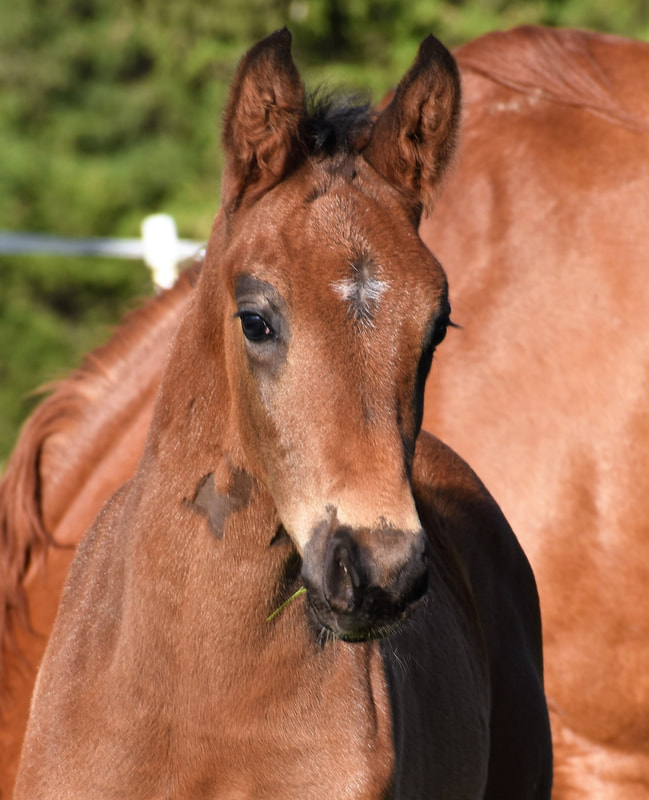