SOLD!! Congratulations to Maddie Bauer on the purchase of this amazing filly!!! 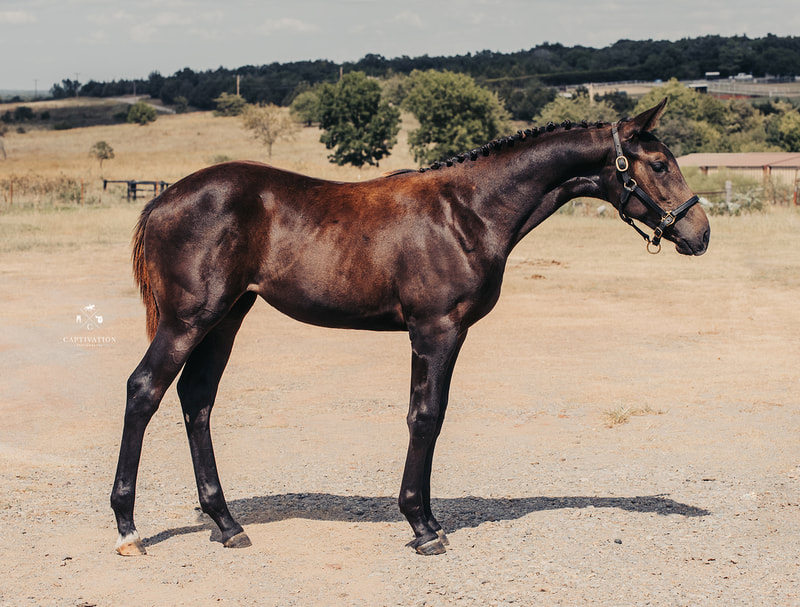 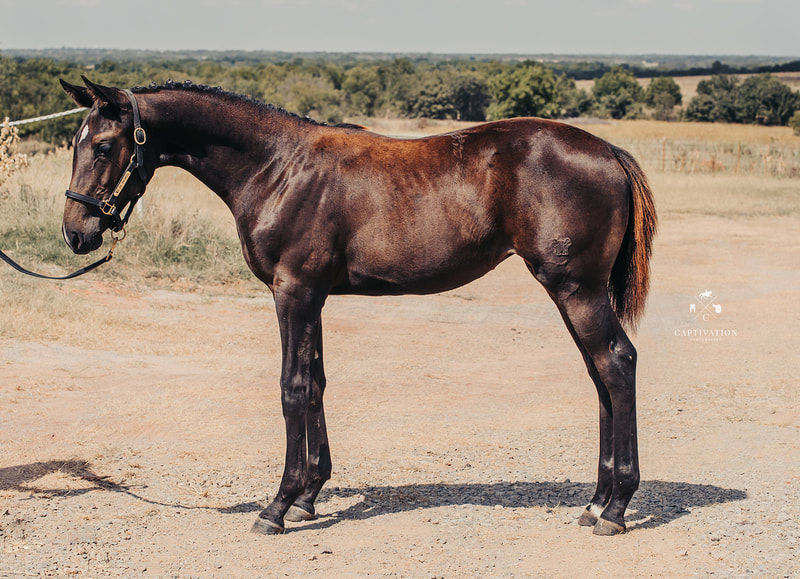 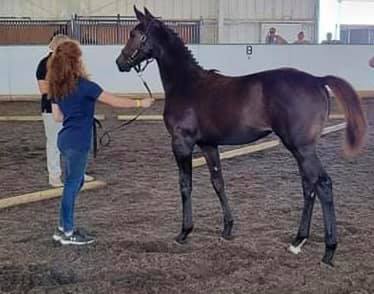 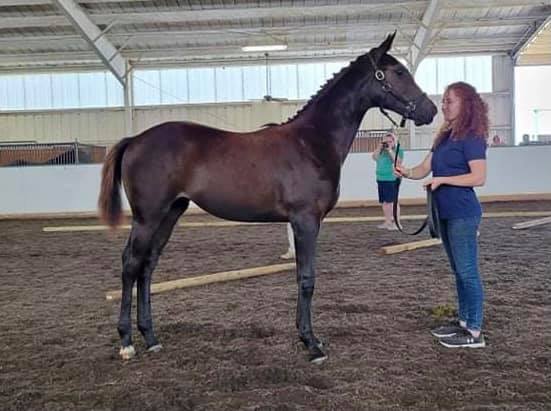 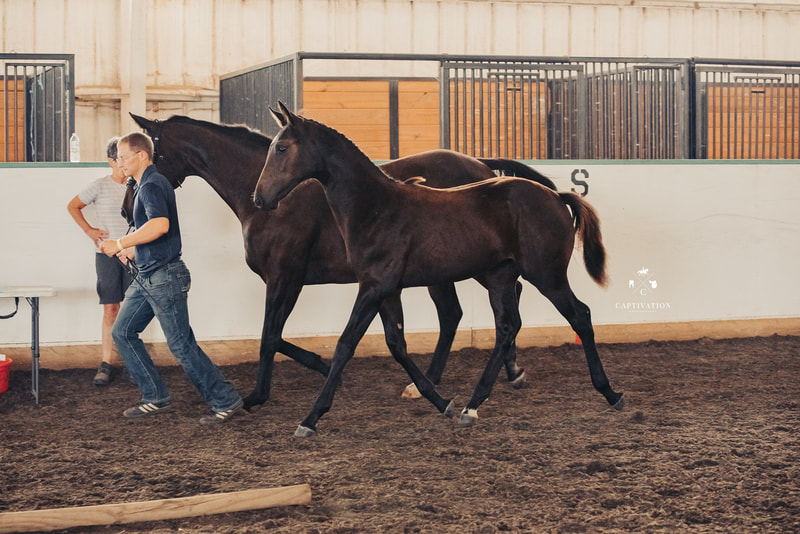 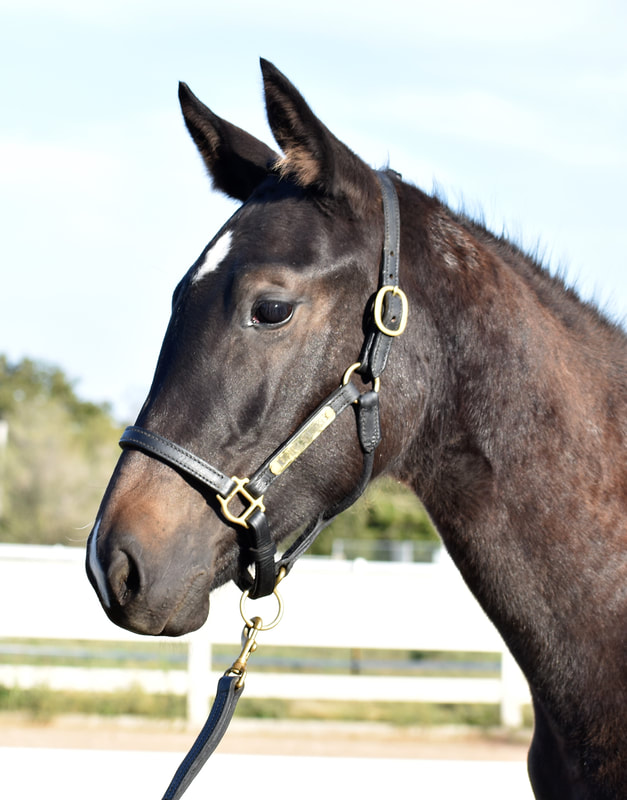 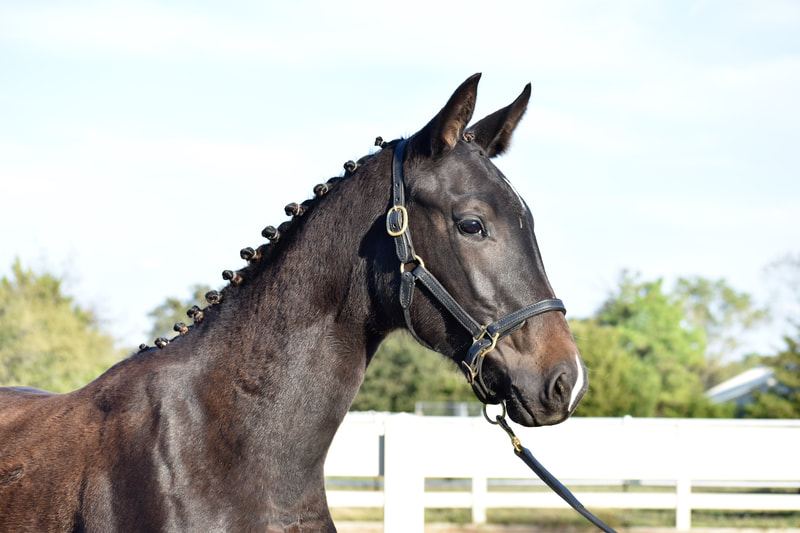 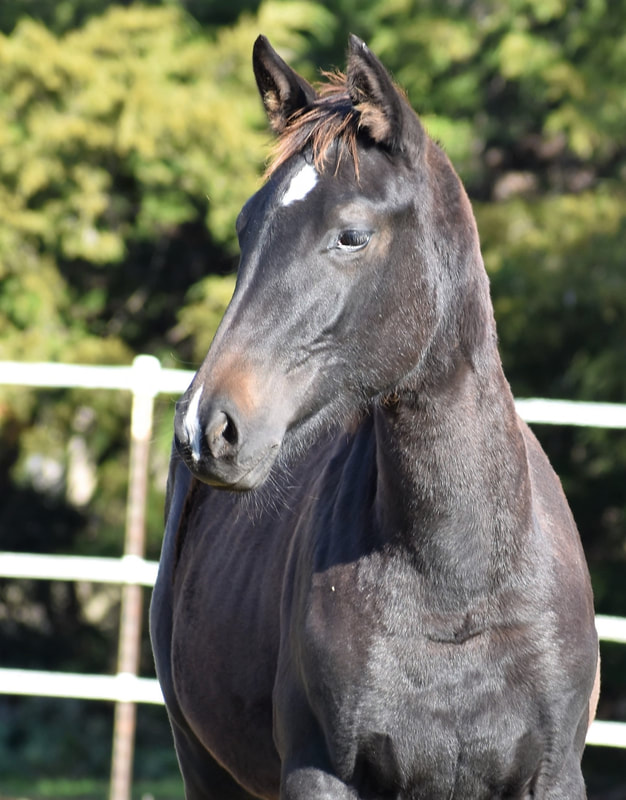 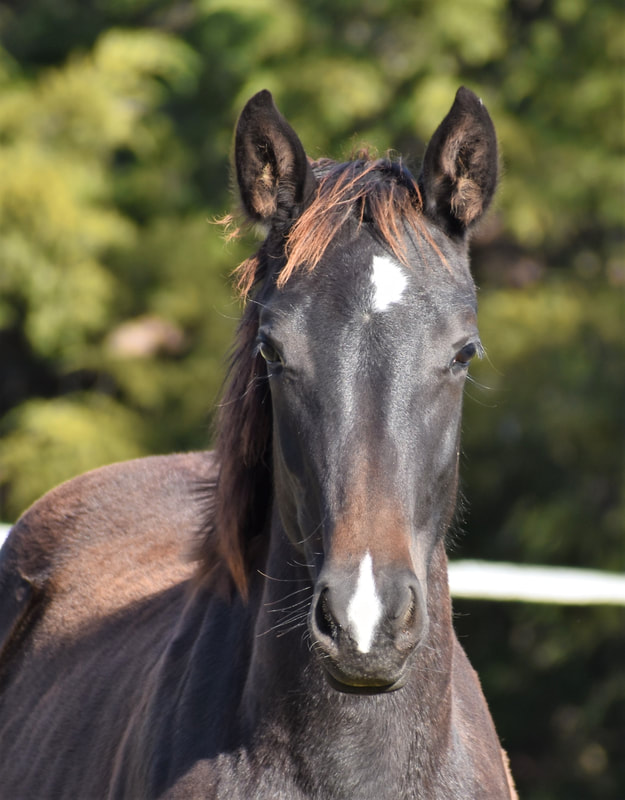 UPDATE! Lady May NLS was named TOP Rhineland filly at her Hanoverian/Rhineland inspection on September 15th at Valley View Equestrian Center in Stillwater, Oklahoma! The judge commented on her quiet and sweet disposition and her lovely conformation.

We are very excited to announce the arrival of this filly! Born March 30, 2021, she is a very large, black bay foal that will likely mature to 17h+. In addition to top jumping bloodlines and her fantastic physical characteristics, she is already showing her athletic abilities as well as a friendly and curious nature, and we fully anticipate that she will sport a strong work ethic, wonderful disposition and the ability to jump the moon!

Sire: (From Eurequine's webpage) Lord Adonis, 16.2hh was raised and owned in Germany by renowned international Grand Prix jumper Rene Tebbel. In 2010 Lord Adonis was presented and approved at the Oldenburg Hengst-Tage. In June of 2012 he was imported to the U.S.A.  A couple of months after leaving quarantine he was taken to the 2012 North American Stallion Performance Testing where he received an impressive 7th in Dressage (110.78), 7th in Jumping (111.83), 8th Overall (111.58). He was one of only four horses inspected for approval by the Hanoverian society earning an Elite status. As printed in the AHS magazine the judges remarked: "Lord Adonis impressed because of his good type and his long legs. He clearly is still developing. In jumping, his ability was especially impressive; in the dressage test, he received high rideability values.  His sire Lordanos is known to produce a ground covering walk and a good canter".  The scores he received during the testing are: Character: 9; Temperament : 8.5; Constitution: 9; Stadium Jumping: 9; Free Jumping: 9; Cross Country: 8.5; Walk: 8.5; Canter: 8.25; Trot: 7.5. His modern type, confident yet quiet demeanor and versatile talents have fully licensed him with multiple breed organizations and studbooks.

Lordanos - USEF LEADING JUMPING SIRE. Sire of LORDAN, winner of the Zoetis $1 Million Grand Prix at HITS Saugerties. The 9 year old won $350,000 for owner/rider Nayel Nasser and was the Leading USEF $25,000 PLUS GRAND PRIX horse. In 2017 Jenny Karazissis rode UNDENIABLE by Lordanos to win the HITS/Diamond Mills $500,000 Hunter Prix. Lordanos career began by winning nearly 40 tests for young jumpers in series. He was successful in 1.40m- and 1.50m-classes for an incredible eleven years. The family horse won advanced (S) classes with all three riding Sosaths - Janne, Gerd and Hendrik and was victorious in both the Big Tour and in puissance, as he jumped over a wall of 2 meters with Janne. In 2007, Lordanos presented a good number of horses that qualified for the Bundeschampionat. After Lumos victory in Warendorf in 2004, Light On was a high placed finalist in the class for five year olds in 2007. The top priced Verden auction horse Lohengrin became the Hanoverian Show Jumper Champion and another son won the licensing in Finland. Lordanos also sired Lex Lugar, 2010 German National Derby winner, who he shared the VTV Stallion of the Year title with in 2010. In 2013, Lordanos was named the top jumper sire in the United States by the United States Equestrian Federation (USEF).

Dam: Lucianna, known on our farm as "Luci" is a lovely Oldenburg mare by Elite Hanoverian jumping stallion Landkönig, and out of an Argentinian Thoroughbred mare. Luci is a 17h black bay mare that boasts a lovely shoulder, neck, topline, long legs, and a beautiful face. In 2019 she was inspected and approved in the Rhineland main mare book with excellent scores for conformation and movement. She will also be presented to the Oldenburg Horse Breeders Society (GOV) in the very near future.

Her sire, Landkönig, is a 16.3H bay elite Hanoverian stallion with 4 socks, a star and snip. Landkönig completed his 100 day test at Adelheidsdorf as a three-year-old and was 7th out of 50 with 118.10 points overall and a 9.5 for stadium jumping, 8's for willingness to work, character, temperament and walk. The Hannoveraner lahrbuck Hengste 2005 lists Landkönig with a jumping breeding value of 132 putting him ahead of Ritual, Drosselklang, Espri, Escudo II, Grosso Z, and many other top German Grand Prix producers! Landkönig is in fact the highest rated jumper listed standing in the US, listed in the 2009 stallion yearbook with a jumper breed value of 134 to 140 for ability, slightly higher than super producer and 2007 stallion of the year Argentinus. Landkönig has produced, from his first foal crop, a licensed Hanoverian stallion son and in 2002 broke the record for producing the highest selling jumper ever in the history of the Hanoverian Elite auctions in Germany. Lantinus, a four-year-old gelding, sold for 215,00 Euro, also setting the record price for the Hanoverian auction year, something never done by a jumper!

Her damsire, Nostalgias Star xx,  won over $2 million in 59 lifetime starts before retiring to the breeding shed. Nostalgias Star xx boasts thoroughbred lines that are found in the pedigrees of multiple international sport horses.

Price: $9850. Lady May has been inspected, branded, and microchipped, and her registration certificate through the American Rhineland Studbook should be back soon.  She will come with a lifetime USEF number. She has received all of her vaccinations, has a current negative coggins, and has been on a regular deworming and farrier schedule since birth. Pre-purchase exams are welcome and encouraged at buyers expense. Payment options and young horse boarding at a reasonable price are also available. Please call or email for further details at info@nextlevelsporthorses.com.

Continue to check back for new photos and videos! We strive to keep our website current! 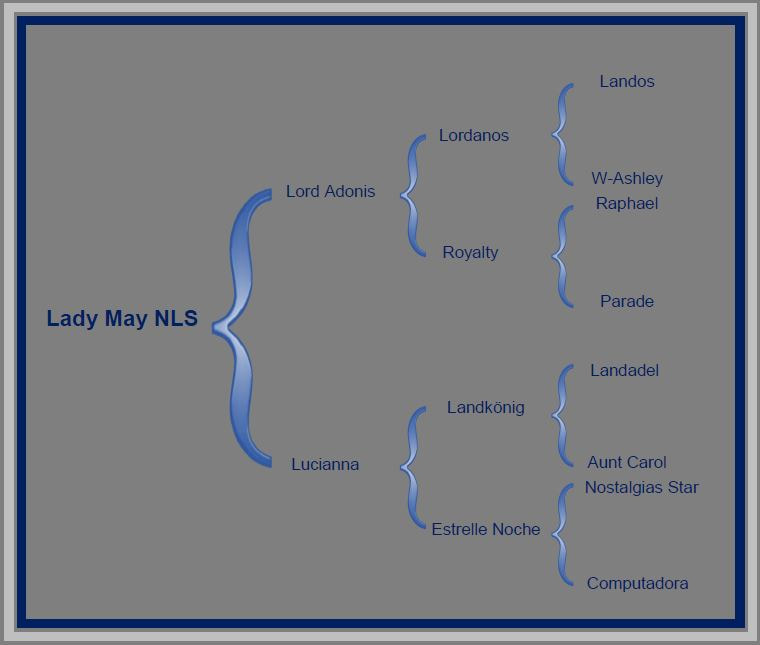